When I first heard about a Watchmen movie, I thought it was a terrible idea.

Then I came around and was merely apprehensive.

I read some interviews with director Zack Snyder and felt at ease.

Then the media blitz happened… and now I am feeling apprehensive again.

I know that Snyder has taken some creative liberties with the story. Some are mundane and don’t matter much, others like changing the way the end plays out are big, but from what I’ve read, make sense to me.

However there are aspects to the story that will only work in comics; I am prepared to watch the movie knowing that. So, don’t expect to hear me rant about those as I think many of my geek brethren will.

What is making me apprehensive are the ads and merchandizing.

Either Snyder has really changed the core characters (which I don’t think he has), or the ads and merchandizing are exceptionally misleading. Allow me to demonstrate:

During my visit to NYC to see BB King & Buddy Guy I met my friend Jackie at the Borders bookstore next to Penn Station.

As I approached the store, I saw a big display for the Watchmen graphic novel (I was inspired by Mark from JerseyStyle Photography to carry my camera with me more often).

Then I walked into the store and saw the latest Entertainment Weekly on the racks. 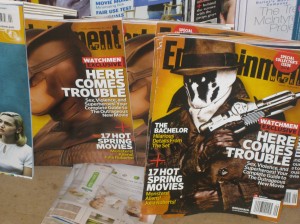 Then I found this table in the center of the store. 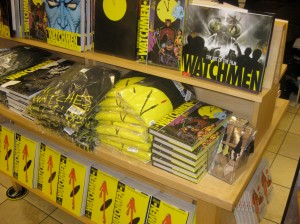 The Rorschach bookmarks are what really trouble me.

Here’s what bothers me about this…

ALL OF THIS CRAP IS MISLEADING!!!

This is not a kid friendly story. It’s “Rated R for strong graphic violence, sexuality, nudity and language.”

Don’t get me wrong, I have no problem with violence, sex, nudity or foul language, but I do think that the advertisements are making the movie look like something it isn’t.

This is not kid friendly. The only people who should be buying Rorschach bookmarks are people who know how ironic this product is. He looks like a friendly hero in that picture… He’s not!

Rorschach is an ultra-violent and deeply disturbed individual.

If you thought that the Dark Knight was dark, scary, and a movie that you shouldn’t take your kids to, Watchmen should be 100 times worse.

Something is off here, the ads/ merchandising or the story. I really hope it’s the former.

If they stay true to the story it should be a thrilling ride… just not one to bring children on.

2 thoughts on “Getting Apprehensive About Watchmen”