Correction: the piece was published by The Associated Press

Anders Behring Breivik, the evil bastard who murdered 77 people (69 of them kids) in Norway testified today that he played the video game, Modern Warfare to sharpen his aim. He also explained that he was inspired by al-Qaida to decapitate the Prime Minister of Norway; took steroids; meditated to “de-emotionalize” himself; and that he’s a “Knights Templar.” 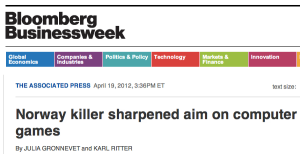 Julia Gronnevet and Karl Ritter of  The Associated Press wrote a piece on the testimony titled, “Norway killer sharpened aim on computer games.” It’s 1,099 words long, and of those 1,099 words only 152 of them are even remotely about Breivik’s use of video games. And of those 152 words, 77 of them cast a ton of doubt on the claim that video games helped him at all. Here’s all 152 words:

In a chilling summary, the far-right fanatic claimed Thursday that he sharpened his aim by playing computer games for more than a year before Norway’s worst peacetime massacre.

Breivik said he played the computer game “Modern Warfare” for 16 months starting in January 2010, primarily to get a feel for how to use rifle sights. In 2006 he devoted a full year to playing “World of Warcraft,” for 16 hours a day, he said.

Christopher Ferguson, of Texas A&M International University, said there is no link between violent video games and violent behavior. Though some research suggests that action games can improve “visuospatial cognition,” he said it’s difficult to say whether Breivik could have improved his accuracy by playing “Modern Warfare.”

“Let us keep in mind too that he was shooting kids on an island from which they could not escape easily,” Ferguson said. “That does not require great accuracy.”

The rest of their story is filled with substantive and non-sensationalistic things like:

Breivik told an Oslo court he took steroids to build physical strength and meditated to “de-emotionalize” himself before the bombing and shooting rampage that left 77 people dead.

His lack of remorse and matter-of-fact description of weapons and tactics — he even considered using a flame thrower — was deeply disturbing to families of the victims, most of whom were teenagers.

The 33-year-old Norwegian was ice cold when he once again described his victims as “traitors” for their links to Norway’s governing Labor Party.

The government building he tried to blow up was “the most attractive political target in all of Norway,” he said.

Breivik said he had planned to capture and decapitate former Norwegian Prime Minister Gro Harlem Brundtland while filming it, but she had left Utoya earlier that day.

The self-styled crusader said he was inspired by al-Qaida’s use of decapitation, but noted that “beheading is a traditional European death penalty.”

But no. Video games get top billing, because video games are clearly the villain in this horrific story.

I’m saying this with a fair amount of authority. I’ve been shooting since I was a boy, and worked for three years as a shooting instructor. I’m great with guns, and even better with a bow and arrow. I’m also bad at Modern Warfare. Mastery of shooting skills in real life have no connection to shooting skills in first person shooters, and vice versa.

Similarly, Guitar Hero and playing a real guitar have nothing in common.

For the record, I’ve never even gone hunting, let alone shot at a human being.

While the name may sound menacing (I guess), World of Warcraft is best described as the video game love child of Disney and Lord of the Rings. It’s got plenty of action, but it’s also pretty whimsical. Have a look at World of Warcraft’s upcoming expansion Mists Of Pandaria and I think you’ll understand what I mean.

That’s what this is, in addition to being horrible journalism.

Every once in a while someone kills people and they played video games too. They also exercised, ate food, took showers and probably had sex, but video games are blamed. Every single time. You know what no one ever writes about? The millions of avid gamers who get up in the morning; go to work; spend time with loved ones; play video games; and don’t murder anyone.

Less than 10% of The Associated Press article claims any correlation between this evil bastard’s killing spree and gaming. They subsequently cast doubt on the claim, and then give their article a title definitively stating that video games helped him kill. That’s wrong, and Julia Gronnevet and Karl Ritter know it. This is unproductive, and manipulative link bait, and I just won’t stand for it.

If The Associated Press has any ethics they will rename that article with a title that actually reflects its content.

One thought on “Did Video Games Kill 77 People in Norway? And Bloomberg Businessweek Ethics”