I am burning with the fury of a thousand exploding suns over the termination of Google Reader. 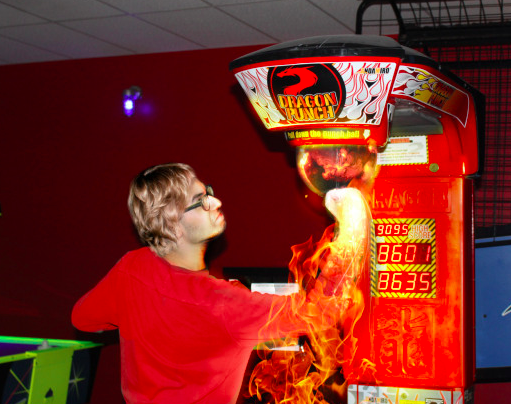 My life is an endless quest to learn more and suck less. And for years I have spent countless hours consuming web content through Google Reader to help me work towards that unending goal. I spend a ton of time using Google Reader… A minimum of an hour a day, and a maximum… Well I’m embarrassed to say. I read a lot. On Google Reader.

So, you can imagine my dismay at this love note Google left in my most cherished application:

Google has clearly been working towards the termination of Google Reader for a long time (and this was confirmed by a former Google Reader product manager). They have been hobbling its capabilities for years, but it never pissed me off enough to leave. I just kept adapting around the added weaknesses.

While I’m on the subject, I want to be clear that I am not one of those people who gets pissy over application redesigns, and feature changes. I’ve spent more than a my fair share of time architecting websites and applications. I know what goes into the evolution, and I know that no redesign makes everyone happy. 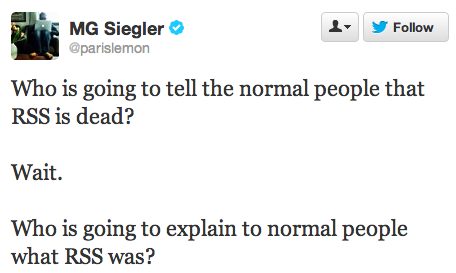 To which I replied:

And Drew Olanoff of TechCrunch wrote:

“Thanks to Twitter, Flipboard and Facebook, I have more content than I can shake a stick at. I don’t want to read every single thing that WIRED writes, I want to read the things that people I know think are awesome. Google Reader never did that for me, so it must go” (TechCrunch).

I looked Drew up on LinkedIn, and he’s a community manager. Of course he doesn’t give a shit about learning about things that are unfound. He has no need to. That doesn’t mean that Google Reader needs to kick the bucket.

Some folks compare RSS to drinking from the fire-hose of data. I’ve never felt that way about RSS, but that’s exactly how I feel about social media.

If I have to wait for my friends to learn something cool in order for me to learn it, I fail. A large part of my job is to know stuff before the “normals” do.

A Crisis of Faith

I use a ton of Google products to manage my information. Most notably Android, Gmail, Drive/Docs, Calendar, Contacts, Search, Voice, Hangouts, Chrome and the aforementioned Reader. The reason I love Android is the Google suite of integrated apps. These are applications that are critical to me as an individual and a professional.

Let me repeat that.

These applications are critical to my business, and my ability to service my clients. When Google kills one of them, they are cutting off a critical piece of how I work. It makes me wonder if they will do the same to other applications that are so central to my daily life that I think of them as extensions of my own mind. And make no mistake, that’s what Google Reader is to me. It’s an extension of my awareness and memory.

The Spira Family motto is “We don’t suffer from insanity, we enjoy it.” If we had a second one it would be, “Don’t get mad, get even.”

If my RSS feed is getting the proverbial axe, well so is one of the largest data feeds Google gets from me: Chrome. I’m switching back to Firefox.

I may also look for other places to split from the Google ecosystem. This incident has really hit home how foolish it is to rely so heavily on one technology provider.

Thanks for the wakeup call Google.

10 thoughts on “Justice For Google Reader!”