Strange as it may seem, there is a legal reason  why there are so many super hero movies. No kidding.

Before we dive into the movies, let’s talk about who owns these characters.

With the exception of a few franchises like Hellboy, Kick Ass, and Judge Dredd, most comic super heroes are owned by Marvel (a subsidiary of Disney) and DC (a subsidiary of Warner Brothers [which is owned by Time Warner]). 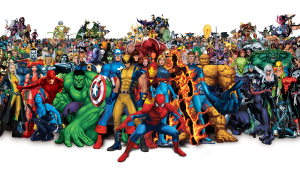 And in the comics, all of these characters interact with one another on a regular basis (except for Blade… Marvel loves to forget that he exists because he is way cooler in the movies).

And in the comics, all of these characters interact with one another on a regular basis (seriously, DC keeps trying to make people like Aquaman).

Crossovers between the two companies have happened, but they pretty much take a Constitutional Amendment to make them a reality… And the stories always end up being monuments to creative compromise.

DC owns the movie rights to all of their characters. Nothing confusing here.

Marvel on the other hand does not.

Back before the boom in super hero movies, Marvel decided to sell off movie rights to production studios which resulted in some hilarious terrible and little known movies such as:

This method also produced X-Men (2000) and Spider-Man (2002) staring Toby Maguire. The success of these two movies marks the beginning of the super hero movie boom.

DC produced Batman Begins, and then took a bath in the ocean of cash they made.

Marvel woke up and realized that they were sitting on a gold mine. However they already sold off movie rights for many of their characters.

Sony owns Spider-Man and most important associated characters and villains.

Fox owns The X-Men and the Fantastic Four (including the Silver Surfer & Galactus) and most important associated characters and villains.

The Avengers, SHIELD, and all associated characters and villains… Along with just about all other Marvel characters not listed.

WTF does this all mean?

Disney has built a massive movie-verse where all of their characters live and interact from time-to-time. At the moment it’s helmed by Kevin Feige and Joss Whedon, and culminated in The Avengers.

Clearly they made a good decision.

They have a highly organized and ever-expanding long-term plan to continue pumping out super hero flicks. Their current movie pipeline that goes years into the future, and they are constantly expanding farther.

On the success of The Avengers, Fox has allegedly decided to make their own Marvel movie-verse featuring the X-Men and Fantastic Four. They brought in comic writer Mark Millar who has written successful runs of both franchises in the comics to consult.

They also have to keep putting out movies with these characters, or the rights will revert back to Marvel. So while they don’t have much of an announced pipeline past the next X-Men movie, you can expect Fox to flood the market over the coming years.

If they lose the rights, they will be gone for good. Marvel won’t be selling movie rights again, you can take that to the bank.

Sony is in the same boat as Fox. They own the rights to Spider-Man, but they have to keep putting out movies or the rights revert back to Marvel (which was why a Spidey-reboot came so quickly).

Spider-Man is in a movie ghetto of sorts. It would take a monumental legal arrangement for him to appear in any other comic franchise movie (which is a big disappointment to many fans).

The folks at DC aren’t in a legal rush. They have no expiration dates on their characters, but they do want to make Avengers-level cash. Which is why they plan to create their own movie-verse featuring Batman, Superman, Wonder Woman, and some other Justice League characters.

… So you can expect them to proliferate like crazy as well, beginning with the recently announced Batman vs. Superman (2015).

The strangest pieces of all of this insanity is that there are two characters where the movie rights are owned by both Fox & Disney/ Marvel.

The Scarlet Witch and her brother Quicksilver are Avengers (and will be in The Avengers 2), but they are also the children of Magneto… Making them X-Men characters. Quicksilver (as a different actor) will appear in the upcoming X-Men movie as well.

This chaos also results in disappointments for fans (beyond Spidey).

Also, Spider-Man fans… Get used to disappointment. You won’t be seeing Spidey crossovers in other franchises anytime soon.